Lake Almanor, California: Where the Sierras Meet the Cascades

Lake Almanor is the eighth largest reservoir in California. Located in northwestern Plumas County in the northeastern part of the state, Lake Almanor has a water volume of 1.61 cubic kilometers, or 1,308,000 acre-feet.

If you've been to Lake Almanor, please write your impressions about it by using the form below.

The Lake Almanor area is a place of natural beauty, where the Sierra Nevada range and the Cascade range meet, and is a gateway to Lassen Volcanic National Park. Lake Almanor is also the southern starting point of the Volcanic Legacy Scenic Byway, a 500-mile All American Road that takes you from volcano to volcano and through incredible scenery.

Water skiers often enjoy the early hours of the day, when the lake’s surface is smooth, while sailors and wakeboarders enjoy the afternoon hours, when breezes sweep across the lake. If you want to explore the lake’s coves, you can easily do that in a kayak or a canoe. Lake Almanor is a great place where you can just cruise leisurely and enjoy the scenery. Marinas can be found along every shore, where you can rent boats, slips, etc.

Fishermen are usually out early on Lake Almanor, as there is a variety of fish to be caught here, including rainbow trout, brown trout, crappie, king salmon, and smallmouth bass. You could pretty easily hook 4 to 5-pound rainbow trout here, but they can even get to 10 pounds. Locals believe there are even bigger ones in the depths of the lake.

During the day, 4 to 6-inch worms at depths between 10 to 30 feet may be some of the best fishing you have ever had. If you enjoy fishing close to the shore, you should try rigging Senkos under floating docks. Although fishing here is best during the summer and fall, you can get lucky at any time of the year.

During the summer, the water is perfect, and its temperature can reach 75 degrees Fahrenheit (24 degrees Celsius). Lake Almanor Recreation Trail, which offers scenic views of the lake and mountains, is an easy, flat, 9.6-mile long route on the western shore that can be used for biking and walking. Most of the lake’s public beaches can be found in Prattville, which also has family cabins, boat launch facilities, camping and RV sites, and the historic Camp Prattville.

If you are in the mood for culture, you can always visit the Chester Museum or the Collins Pine Museum.

Your vacation at Lake Almanor would not be complete without a visit to the Lassen Volcanic National Park, a truly beautiful place where spectacular ancient and active volcanoes can be found. As a matter of fact, all four major types of volcanoes are present in the park: plug dome, cinder cone, composite, and shield. Lassen Peak, 10,457 feet in height, is one of the largest plug dome volcanoes in the world.

Lassen Volcanic National Park has 150 miles of trails where you can hike or horseback ride, and enjoy the spectacular boiling pools, mud pots, and hissing fumaroles (steam vents). There are also 8 developed campgrounds here, dozens of small mountain lakes, and a vast backcountry wilderness.

Bird watchers will be delighted to find out that 83 species of birds call the park home, including hawks and eagles.

Lake Almanor offers plenty of quiet spots where you can relax and forget about your worries. Photo credit: Eric E Castro.

Lake Almanor was formed by the building of Canyon Dam on the North Fork Feather River. It has a surface area of 103 sq km (40 sq mi), and reaches a maximum depth of 28 meters (92 feet), with an average depth of 16 meters (52 feet). Besides North Fork Feather River where it was built, it has two other main inflows, Benner Creek and Last Chance Creek.

The lake and its surroundings are divided into several areas. The northern section of the lake is referred to as the North Shore, which is also the name of the campground here. To the East, The Peninsula is a large peninsula that bisects the reservoir. The community of Almanor is located here, as well as a couple of residential developments and a country club.

Hamilton Branch, a community named after the river bearing the same name, is located to the south of the Peninsula. The area between Hamilton Branch and Canyon Dam, which is the community located on the lake’s southeastern shore, is called East Shore.

The southern shore of the lake is located in the Lassen National Forest, which has a total area of 1,700 sq mi (4,300 sq km). On the northern shore large areas become seasonal pastures, used as grazing grounds. During wetter years, these grazing grounds may be underwater.

A variety of migratory birds use the wetlands on the northern shore of the lake for breeding. These birds include grebes, Canada geese, and species of ducks such as teal, mallard, and wigeon. Large birds can be spotted here as well, such as heron, and birds of prey like osprey and bald eagles. These birds use the Peninsula as nesting grounds. 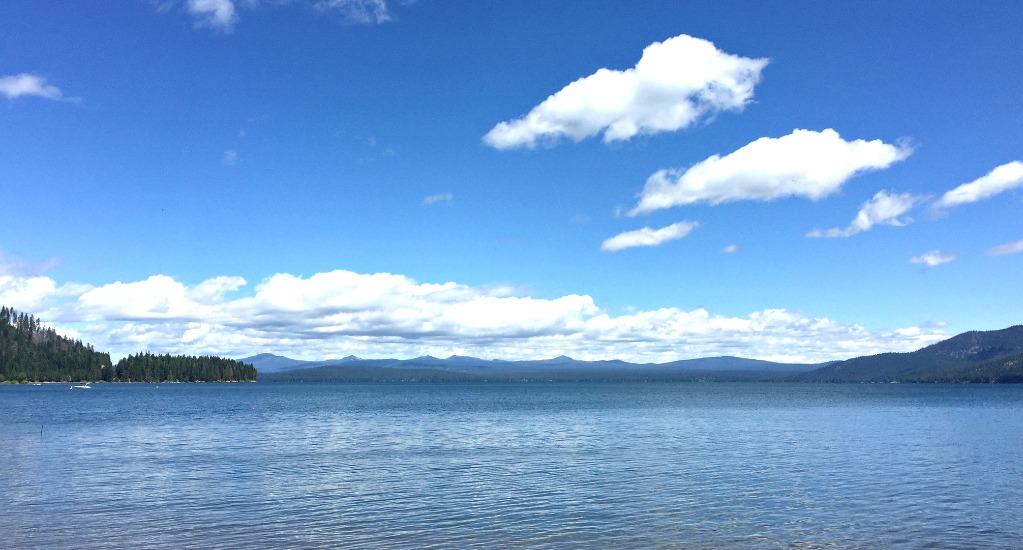 Canyon Dam and Its History

Canyon Dam has a height of 130 feet (40 meters), and is composed of hydraulic fill.

An initial dam was completed in 1914 by Great Western Power, flooding the meadow-filled valley which was the site of a Yamani Maidu village. Maidu families who were still living here were displaced, and parts of Prattville had to be moved to higher ground. Multiple structures were flooded.

The name of the Almanor Reservoir comes from the three daughters of Guy C. Earl, Great Western Power’s Vice President: Alice, Martha, and Eleanor. The current dam was built between 1926 and 1927 also by Great Western Power, and more than doubled the size. Currently, the dam is owned by the Pacific Gas and Electric Company (PG&E), and is used for hydroelectricity production.

In 2004, the state water board considered installing a thermal curtain at the bottom of Lake Almanor, which was meant to control water temperatures of rivers downstream, and in turn to create better habitat for trout on those rivers. However, residents near Lake Almanor became concerned that this would raise water temperatures in the shallow reservoir, harming local fish populations.

Have You Been to Lake Almanor?