Lake Brienz (or Brienzersee) is a lake located in central Switzerland in the canton of Berne, North of the Alps. The lake has a surface area of approximately 30 square kilometers (or about 12 square miles), and maximum depth of 260 meters (854 feet). The average depth of the lake is 173 meters (568 feet).

If you've been to Lake Brienz, please write your impressions about it by using the form below.

The length of the lake is about 14 kilometers (or 8.7 miles), and its maximum width is about 2.8 kilometers (1.7 miles). Lake Brienz sits at an altitude of 564 meters, or 1,851 feet. It has 2 main tributaries: Aare River, which flows into the eastern section of the lake, and the Lütschine River, which flows into the southwestern section of the lake from the valleys of Grindelwald and Lauterbrunnen. Aare River also flows out of the western end of Lake Brienz. The lake’s catchment area covers a surface area of 1,127 square kilometers, and reaches its highest point at Finsteraarhorn, which is 4,274 meters (14,022 feet) above sea level.

The lake takes its name from the idyllic little town of Brienz, which is located on the eastern shore of the lake. Lake Brienz is separated from the nearby Lake Thun to the West by a tongue of land called Bödeli. The most important lakefront village at the lake’s western end is Bönigen. Interlaken, an important resort town, is located approximately midway between Lake Brienz and Lake Thun. Other lakefront villages include Iseltwald on its southern shore, and Ringgenberg, Niederried and Oberried on its northern shore.

The lake is ultraoligotrophic, which means that it’s very poor in nutrients and fishing is not a significant activity here. However, this is also the reason why the lake has very clear and clean waters that boast a particularly beautiful turquoise color. 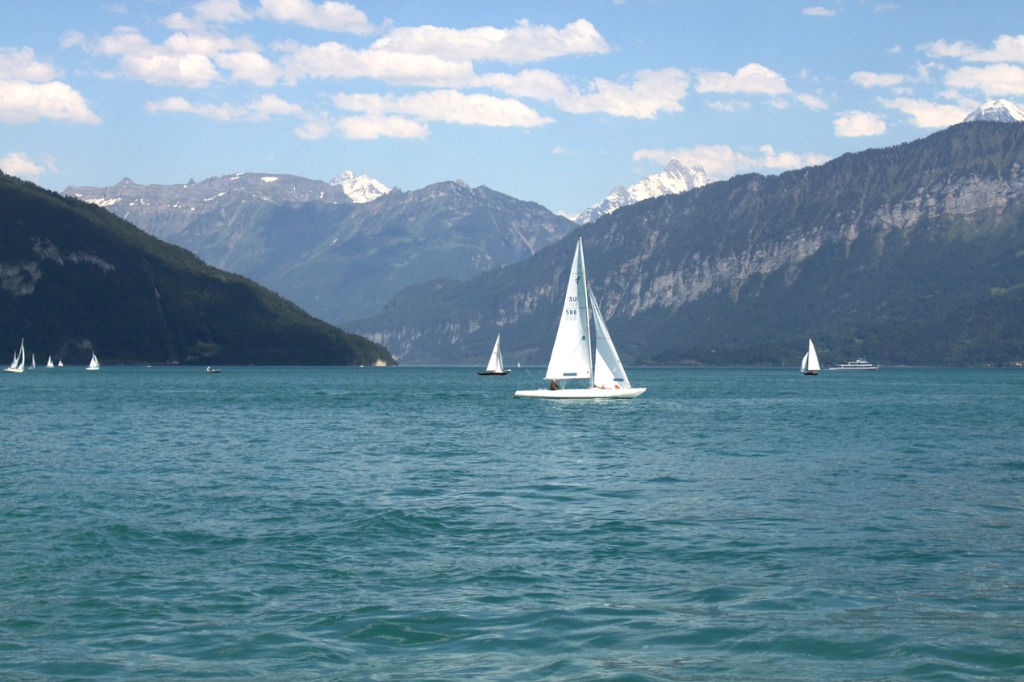 You will have no problems in getting to the lake: the northern shore of the lake is followed by the Brünig railway line, while the A8 motorway runs along its southern shore. Several passenger ships operate on the lake itself, which connect Brienz to other lakeside villages and go as far as the Interlaken Ost railway station, which is accessed via a navigable stretch of the Aare which is 1.3 kilometers (0.8 miles) long. The ships also offer connection to Giessbachbahn, the oldest funicular railway in Europe, which climbs up to the famous Giessbach Falls.

Giessbach Falls is a spectacular waterfall that thunders down 500 meters into the lake in a number of stages. The historic Grand Hotel Giessbach, which looks like it’s taken right out of a fairytale, sits immediately besides the waterfall. Another popular activity at Lake Brienz is the walk along its southern bank from Bönigen to Giessbach via Iseltwald. If you want to get closer to the water, you can always go swimming into the crystal clear lake, or rent a kayak or boat.

Lake Brienz is one of the natural wonders of Switzerland with its turquoise-blue waters and stunning views of the surrounding mountains. Best way to experience the lake is renting a kayak or taking part to a guided half- or full day kayak tour with Hightide Kayak School. There is a historical castle, beautiful little rocky beaches, cliffs, waterfalls and lovely villages to explore. Also hiking, fishing (with a licence), stand-up paddle boarding and lake cruises are possible. Best place to start your excursion is BÃ¶nigen, just 8 minutes bus trip from Interlaken East train station.

Have You Been to Lake Brienz?