Lake Constance (in German, Bodensee) is the third largest lake in Central Europe after Lake Balaton and Lake Geneva. Since it was formed by the Rhine Glacier during the Ice Age, it is a glacial lake.

If you've been to Lake Constance, please write your impressions about it by using the form below.

Lake Constance has a total surface area of 571 km2 and is located 395 meters above sea level. The lake is located at the Northern foot of the Alps, on the border between Germany, Austria and Switzerland. Its shoreline belongs to the federal states of Bavaria and Baden-Wuttemberg in the German side, the federal state of Vorarlberg on the Austrian side, and the Swiss cantons of Thurgau, St. Gallen and Schaffhausen. The culminating point of the drainage basin of Lake Constance is the Todi, with an elevation of 3614 meters. Since the Rhine, the Bregenzer Ache and the Dornbirner Ache all carry sediments from the Alps into the lake, they are constantly, but gradually decreasing the lake’s depth and coastline extension on the southeastern end.

A number of islands can be found on the lake, of which the three largest are Reichenau (famous for the UNESCO-protected Reichenau monastery), Lindau and Mainau, a preferred tourist attraction. Triboldingerbohl and Langbohl are two other larger islands, though they are inaccessible. Dominic Island and the Island of Hoy are among the many smaller islands dotting the waters of Lake Constance. Numerous peninsulas can also be found on the lake, such as Bodanruck, Mettnau in Untersee, Rohrspitz, Hori and Wasserburg.

Conservation areas offer protection for various plants and animals. The Rhine delta, the area of the Argen River and the Eriskircher Ried on the Obersee, the Aach Ried Reserve, the Seefelder Aach mouth and the Sipplinger Triangle on the Uberlinger See, and the Wollmatinger Ried on the Untersee are some of the largest reservations around Lake Constance.

The Bodensee area is the only area in Europe where there aren’t any borders, since no legally binding agreements exist about where the border should be on the lake. Switzerland considers the border should go through the middle of the lake, whilst Austria reckons that the contentious area should belong to the states on its bank. Germany has an ambiguous opinion. This issue is still under dispute.

The regulated Rhine River arrives to the lake at its southeastern part, makes its way through the Obersee, the city of Konstanz and the Untersee, then exits the lake near Stein am Rhein. It supplies many cities with fresh water, and it is also referred to in German as Bodensee-Wasserversorgunk, meaning Lake Constance Water Supply.

Large parts of the lake have been partially frozen in a number of instances. The lake was completely frozen three times during the last 150 years: in 1830, 1888 and most recently, in 1963. Occurrences of high water levels and floods usually happen in the spring and summer months, after the melting of the snow in the Alps. Some of the absolute highest water levels occurred in the 19th century (6.36 meters on the 7th of June in 1817 and 5.91 meters on the 18th of August in 1821), and on the 24th of May 1999 most recently, with a height of 5.65 meters. A huge flood in the summer of 1999 raised lake levels to 2 meters above normal, with the result of many buildings located on the lake’s shorelines and harbors. In the late August of 2005 a large rainfall raised lake levels by more than 70 cms in a matter of days, washing out highways and railroads.

Although the increasing pollution after World War II raised some concerns, luckily the International Water Protection Commision for Lake Constance quickly took action with some sewage treatment plants, so the water quality is very good these days. The lake’s waters have a seiche response to sharp changes of wind direction. It offers 180 m3 of drinking water which reaches 4.5 million people through 17 major waterworks lines.

Alpenrhein is the main tributary of the Upper Lake, which mixes only partially with the Seewassern, flowing through the lakes homogenously. Dornbilner Ach, Bregenzer Ach, Leiblach, Argen, Sehussen, Rotach and Seefelder Ach are other important tributaries. The Seerheim drains the upper lake and is the main tributary of the lower lake. Average water temperature of Lake Constance is 20OC in July and 15OC in October.

The lake region is known for its mild temperature complete with moderate gradients. During the winter one can witness frequent fog and sultriness in the summer. The foehn is a strong, warm wind, which arrives to the lake from the Alps. 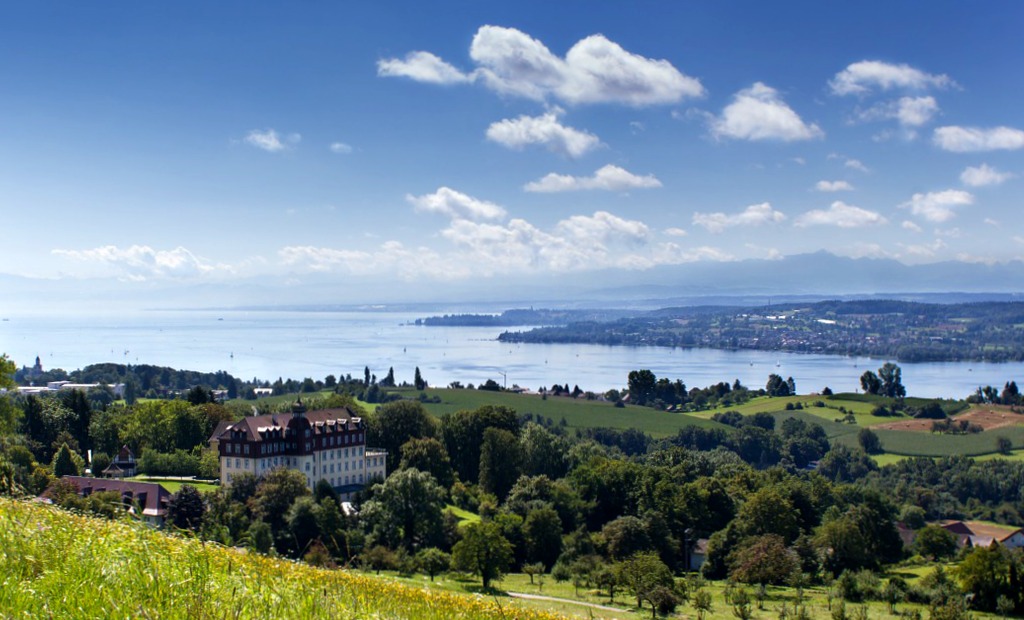 During the 19th century the Lake Constance area was known for having a rich and strong flora, which unfortunately suffered the devastating consequences of deforestation, which affected numerous banks. Several types of orchids and Siberian Irises are conserved in numerous reserves around the lake. The lake area has an excellent climate for growing fruits such as apples, peaches and strawberries.

412 different bird species have been observed around the lake, and especially in natural reserves such as the Wollmatinger Ried, of the Mettnau Peninsula. The common blackbird, the Chaffinch, the house sparrow, the Great Tit and the Eurasian black cap are some of the most frequently-seen species. The region represents an important breeding area for coot and great crested grebes, however numerous birds avoid the area because of the lake’s highly fluctuating water levels.

About 45 species of fish live in Bodensee, and the annual yield of fisheries is 1.5 million kilograms. 57% of the fish are whitefish, 19% are sand whitefish, 17% are perch, 4% bream and 3% lake trout, eel and pike. The rainbow trout is an invasive species, introduced in 1880 with the goal of enriching local fauna. The mud snail (introduced in 1956), the freshwater jellyfish (entering in 1999) and the Danube fish leeches (since 2010) are other invasive species.

The Lake Constance trout was almost extinct in the 1980s as a result of pollution, but thanks to protective measures it has witnessed a significant return. The lake was also home to the now extinct Salvelinus profundus trout species and the Lake Constance whitefish.

The lake was first mentioned in 43 AD by Pomponius Mela, a Roman geographer, who wrote that the Rhine flows through two lakes, and named them Lacus Ventus (Obersee) and Lacus Acronius (Untersee). The Roman naturalist, Pliny the Elder referred to the lake as Lacus Brigantinus, named after the Roman city of Brigantium, known as Bergenz today. The lake was also known as the Swabian Sea at one point.

After the Council of Constance, the ecumenical council of the 15th century, the Latin-speaking Catholics gave the lake its current name. It was derived from the city name Constantia, which was, in turn, named after a Roman Emperor. The Bodensee German name was derived from Bodman, which is a town known today as Bodman-Ludwigshafen, located at a nearby branch of the lake, merely 8 kilometers from the city of Konstanz.

The area belonged to the Celtic culture in the Iron Age, until it was conquered by the Romans. After that it was Roman property until 260, when the Alemanni settled down here.

The main economical features of the lake are transportation, recreation, drinking water and viticulture. Fishing is also important, but it’s not as meaningful as it used to be. The largest industrial location is Friedrichshafen for its metalwork and Bergenz for its textile industry. Constance, Bregenz, Friedrichshafen and Lindau are the most important service locations.

There were an estimate 1600 fruit farms around Bodensee in 2011, which resulted in a total harvest of 280,000 tons of apples. This meant that every third apple commercialized in Germany originated from the Lake Constance area. Viticulture is also of paramount importance, with grape varieties such as Pinot Noir, Muller-Thurgau and Pinot Blanc being raised in the region. It is the highest grape-growing region in Germany, at an altitude of 400-650 meters above sea level.

Rate shipping is dominated by two main car ferry links (from Romanshorn to Friedrichshafen and from Konstanz to Meerburg), the catamaran connection between Konstanz and Friedrichshafen, and a number of seasonal passenger ships like brunch, dinner, party and dance cruises.

Tourism is one of the most important economic factors at Bodensee. Some of the most significant cities around the lake are Konstanz, Uberlingen, Meersburg, Friedrichshafen and Lindau. Other important attractions are Rhine Falls, the island of Mainau (with a myriad of tulips, narcissi, rhododendrons, azaleas and roses), the church of Birnau, Salem Castle and Old Castle. Zeppelin Museum, Dornier Museum, the Maritime Museum and the Jewish Museum are also visited sites.

The closest airports to Lake Constance are located in Friedrichshafen, Memmingen, Stuttgart and Zurich. The cities and towns around Bodensee are serviced by three national railroads to Germany, Austria and Switzerland. Besides 5 main campgrounds, you can find accommodation in guesthouses, B&Bs, hostels and luxury hotels.

Several cable cars run from the cities of the lakeshore to the top of the mountains, such as the Pfanderbahn from Bergenz, offering stunning views over the lake and its surroundings. Numerous trails can be found around the lake for hiking and mountain biking, such as the Bodensee Trail or the Lake Constance Cycle Path. Boating along with watersports such as sailing and waterskiing are some of the preferred summer activities. There are also a few great diving sites with interesting wrecks, such as the Jura, which is located at a depth of 39 meters. The best time for swimming is between mid-June and mid-September, when water temperatures are between 19 and 25 degrees Celsius. Golfing is also possible at the nearby Montfort Golf Club.

Winter hiking, ice skating and cross-country skiing are some of the most beloved winter activities at and around Lake Constance.

Have You Been to Lake Constance?