Lake Geneva: The Largest Body Of Water in Switzerland 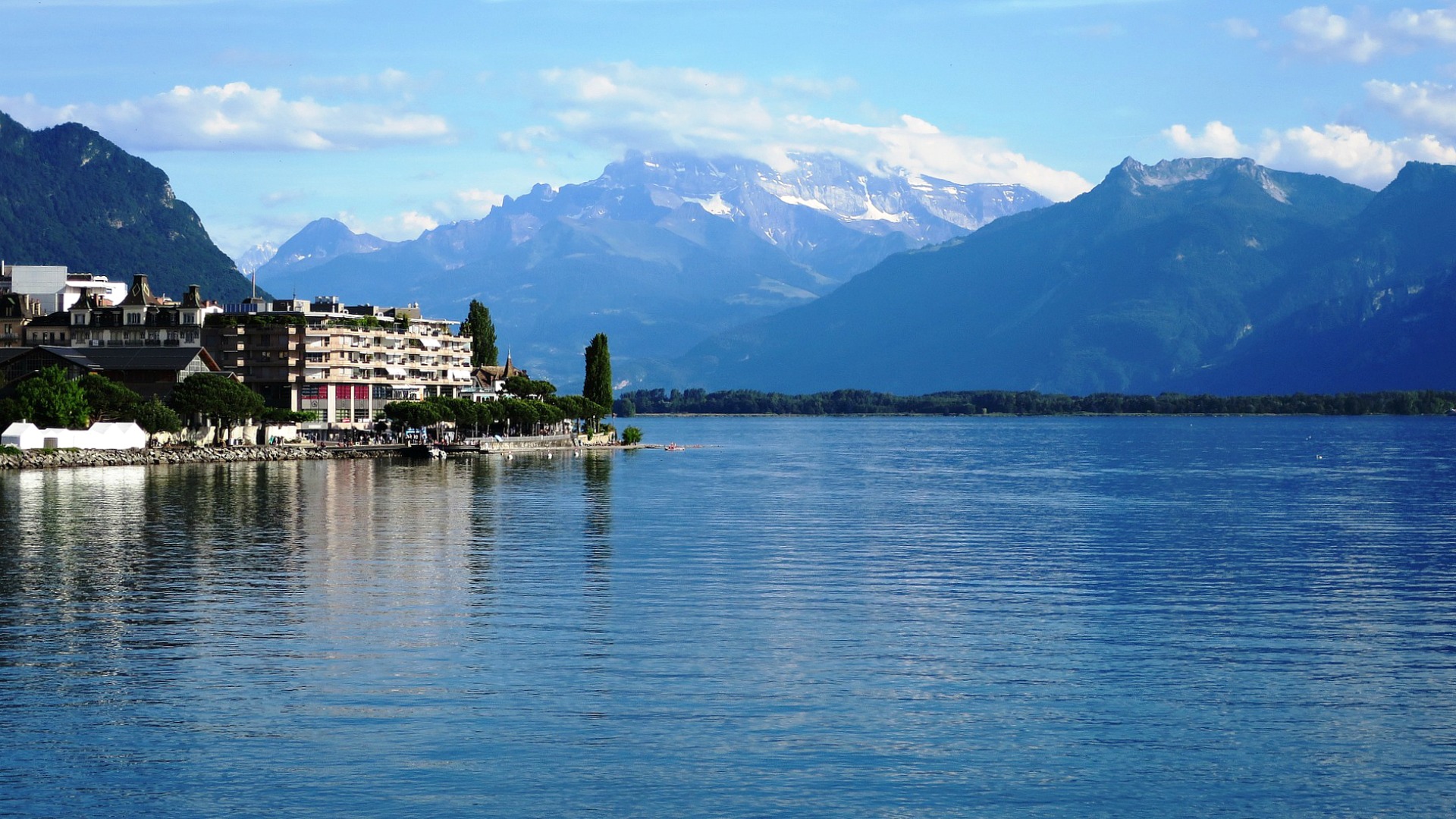 Lake Geneva (also known as Lac Léman) is one of the largest lakes in Western Europe and the largest body of water in Switzerland.

Lake Geneva, of glacial origin, is located on the Northern side of the Alps and it is shared by Switzerland (59.53%) and France (40.47%). Its main basin is characterized by large bottom plateau in the center of it. It has three main parts considering its different ways of formation. Haut Lac, or Upper Lake, was formed through sedimentation and is located on the eastern part of the lake, from the Rhone estuary to the line of Meillerie-Rivaz. Grand Lake, or Large Lake is of tectonic origin and it is the largest, deepest basin with the lake’s largest width. Petit Lac, otherwise known as Small Lake, is situated in the southwestern part, is narrower and steeper, lying from Yvoire-Promenthoux next Prangins to the exit in Geneva.

On the north the lake is bordered by the mountains of Savoy and Valais, which are generally rugged and somber. Gentle vine-covered slopes, dotted with pretty villages and old castles can be found on the northern coast. The eastern shore between Vevey and Villeneuve has a typical Alpine character. The shore between Nyon and Lausanne is referred to as “La Cote” and is flatter. The area between Lausanne and Vevey is called Lavaux and is hillier, covered with vineyards. The culminating point of the drainage basin is Monte Rosa with a height of 4634 meters. The higher peaks of the Mont Blanc and the Grand Combin can be spotted from some areas of the lake.

The River Rhone traverses Lake Geneva. It rises in the Bernese Alps, arrives to the lake at its eastern part between the Swiss town of Villeneuve and the French town of Saint-Gringolph. It leaves Lake Geneva on the west, next to Geneva and later discharges into the Mediterranean Sea. The Aubonne and the Venoge rivers, originating from the Jura Mountains, flow into the lake from the east, while the Drause Alpine River flows in from the South. Other notable tributaries are the Vuachere, the Veveyse and the Morges rivers. Snowmelt is also an important contributor especially during spring.

The lake is notable for its seiches, when the whole water fluid mass rhythmically swings from one shore to another. The Strait of Promenthoux separates the lake into two: Grand Lac can be found on the East, Petit Lac on the west. Regarding water mass balance, the river’s in- and outflows dominate over evaporation and precipitation, making Lake Geneva a fluvial lake, with a theoretical residence time of 12 years.

The lake surface is the lowest point of the Valais and Vaud cantons. Its greatest depth can be found in the broader portion between Lausanne and Evian-les-Bains, where the lake is merely 13 kilometers in width. The maximum depth is 310 meters.

The first optical effects of warming air over cool lake water, also known as “mirages” were observed at Lake Geneva for the first time.

Lake Geneva lies in a temperate climate zone, influenced by both the Atlantic Ocean and the Mediterranean Sea. It can occasionally receive cold, dry air from the Siberian Plains. The monthly mean air temperature ranges from 1 degrees Celsius in winter months to 20 degrees Celsius during the summer. The annual mean temperatures range between 7 and 12 degrees Celsius, with a long-term mean of 10.6 degrees Celsius.

Windfields are dominated by northeastern and southwestern winds, known as “Bise”, a cold and dry wind, and “Vent”, a warm and humid one. These winds are usually short and generate most of the water circulation in Lake Geneva.

The lake is strongly stratified through the summer, but depending on meteorological conditions, can destratify during the cold winter months.

According to the writings of Gregory of Tours and Marius Aventicensis, a massive tsunami swept along the lake in 563, destroying the Fort of Taurendunum. This event was most likely caused by a huge landslide occurring near the Rhone Delta, which caused an 8-meters tall wave that got to Geneva in merely 70 minutes.

In the late 1960s the pollution in the lake was so serious, that swimming in it was forbidden. In the 1980s an intense eutrophication, caused by pollution, almost wiped out all the fish in Lake Geneva. Today these negative factors were taken care of and the lake is currently rich in wildlife (serving as a breeding ground for the common buzzard and the red kite), with clean beaches.

In 58 BC the renowned Roman Emperor, Julius Caesar defeated the Celtic Helvetians and sent them back to their homes in the Lake Geneva area. The Romans eventually defeated and occupied the territory that is today known as Switzerland. The two largest settlements along the lake, Geneva and Lausanne were actually founded by the Romans. Towards the end of the powerful Roman Empire, Christianity began to spread and Geneva served as the seat of the bishop. Several Roman roads were built during this time, crossing the Alps. One of the most significant via romana next to the lake was the Grand Saint Bernard Route.

The Roman Empire eventually collapsed in 400 AD and German tribes started to overtake the fortifications which once had belonged to the Romans. The Burgundians eventually settled in the western part of Switzerland. In 800 AD Charles the Great, the French Emperor, united France, Germany, Italy and Switzerland.

During the Middle Ages the crossing of the Alps became difficult since the old roman roads became unusable, but in the Late Middle Ages these alpine traffic gained importance once again. In the 11th century the Dukes of Savoy began to spread their influence along these mountain roads. Although for a while the counts of Kyburg ruled the area, after the last of them died without an heir, Count Rudolf Habsburg and Count Peter I-st of Savoy argued about the ownership of the territory. Savoy managed to conquer the Vaud Region, north of Lake Geneva in 1266 and Count Amadee V. of Savoy became protector of Geneva in 1285.

In 1519 a party of citizens of Geneva negotiated a pact with the city of Fribourg. This infuriated Duke Charles III, who occupied Geneva with his troops. In 1526 locals signed another pact with Fribourg and Berne, which led to another attack of Duke Charles III on Savoy in 1530. Shortly after the attack on Savoy, Geneva was besieged by 10 000 soldiers. The cities of Berne, Fribourg, Solothurn, Bienne, Neuchatel and Payerne all came to assist the city, thus citizens of Geneva were able to keep their rights against the duke and the bishop.

John Calvin travelled to Geneva in 1536, and although he didn’t intent to stay, he eventually did and tried to pursue locals to follow his reforms. He was not able to move the majority to accept his severe church order and ended up being banished in 1538 from the city. He was later called back in 1541 after reelections of the city council.

In 1602 the Duke Charles Emmanuel of Savoy tried to conquer Geneva but failed. During the 17th and 18th century a number of revolts took place in the Lake Geneva area, which led to the Revolution of 1789, which had a centralistic republic as an outcome, after the French model. In 1803 a federalist model was adopted, while Geneva, Neuchatel and Valais were annexed to France. They were returned to the Swiss Confederacy in 1815 after the defeat of the mighty Napoleon.

Origins of Its Name

During the Roman times the Swiss body of water was referred to as “Lacus Lemannus”, from an ancient Greek word, “Limanos”, meaning port’s lake. Later this turned into Lacus Lausonius, a name also used for a town on the coast. In the Middle Ages the lake was known as “Lacus Losanetes” and “Lac de Lausanne”. After the rise of Geneva, locals simply called it “Lac de Geneve”, but in the 18th century the French revived it into “Lac Leman”. Today it is known as “Lake Geneva” in contemporary English.

A number of famous people visited and lived on the lake’s shores. Mary and Percy Shelley, together with Lord Byron vacationed on the lake, and were inspired to write ghost stories. Empress Elisabeth of Austria (also known as Sisi) was stabbed to death next to the harbor in Geneva in September 1898. Vladimir Lenin rent a small French chalet and holidayed here. Charlie Chaplin spent his final years in the area and died in Vevey. Famous actors such as Richard Burton and Audrey Hepburn lived in villages along the coast. David Bowie spent a few months in Lake Geneva in 1976 and later proclaimed that the area inspired him to paint. Phil Collins lives in a home overlooking the lake. The band “Queen” owned and operated a recording studio in Montreaux.

Arriving to Geneva is fairly simple, since the city of Geneva has its own airport. Public transportation routes are highly effective in Switzerland, and tourists can get to the lake via TGV trains which stop in Geneva, Lausanne, Vevey and Montreaux, or by local buses. Getting around is easiest through boats and trains.

A number of boat cruise and ferryboats have daily routes between most of the communities around the lake. There are a total of 116 public beaches around Lake Geneva, most of them free of charge. An aquapark with waterslides can be found near Villeneuve on the eastern coast, open throughout the year. Numerous zoos and animal parks await families with children, like the Vivarium in Lausanne, the Zoo at Le Vanel or the Tropicarium at Servion. Plenty of hot springs and spas await those in search for some R&R, such as Leukerbad.

The most popular outdoor leisure activities at Lake Geneva are sailing, windsurfing, boating, rowing, scuba-diving and fishing. One can only fish after purchasing a permit. Trout, perch, European cisco, northern pike and arctic char are among the most frequent catches. Cycling is also preferred since the roads are generally flat and the views of the lake are amazing.