Lake Rotorua, considered to be New Zealand’s most productive fishery, has a surface area of 79.8 square kilometres, and is the largest lake in Rotorua Lakes District and the second largest lake in the North Island, after Lake Taupo. Located in the Bay of Plenty Region at an elevation of 279 metres, its most important settlements are the city of Rotorua (population 54,500) on its southern shore, and the town of Ngongotahā (population 4,850) on the western edge of the lake.

The name of Lake Rotorua is translated in Maori as "Crater Lake". The beauty of the lake, which is surrounded by native bush, lush farmland, and steaming geothermal springs and vents, and the multitude of activities available on its shores, make it extremely attractive to both locals and tourists. 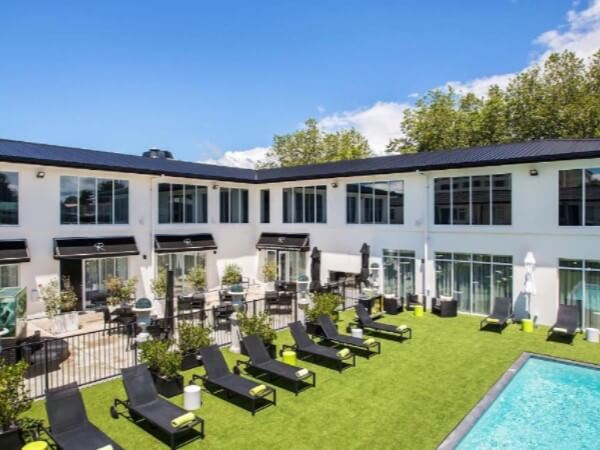 This hotel features an indor mineral pool, a heated outdoor pool, and a great restaurant that offers a contemporary Pacific fusion menu. You will also be greeted with modern décor, luxury linen, and designer furniture. 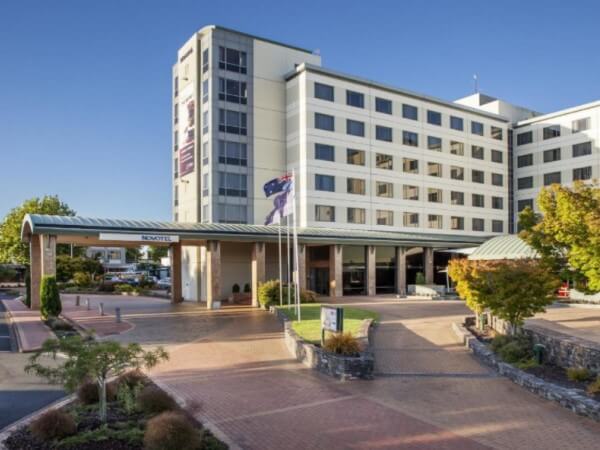 The great advantage of this hotel is its central location on the shores of Lake Rotorua. Being in the heart of the city, it offers easy access to entertainment, dining, and shopping. The hotels features a fitness centre, geothermal spa and hot pools, and a Maori cultural centre. 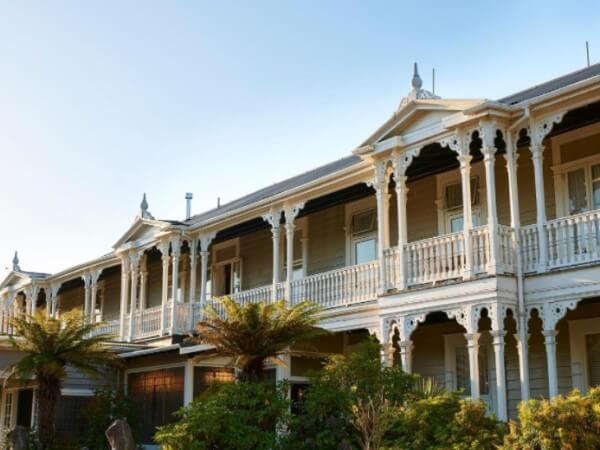 Located in the historical part of the city, this boutique-style hotel features stylish apartments and guestrooms, that are decorated in a classical and traditional style. The hotel is only 100 metres fom the lakefront, opposite to the Government Gardens and the Polynesian Spa.

There are many attractions around Lake Rotorua to keep you busy for a few days. For casual walking and just taking in nature and the scenery, Rotorua Lakefront and Hamurana Springs are good options. If you want to get in touch more with Maori culture, you could take a trip to Mokoia Island or Whakarewarewa Thermal Village. In case you want to experience the power of nature at its raw and beautiful state, Pohutu Geyser or Sulphur Point are the best options. One thing is for sure: there are a lot of attractions to choose from, that cater to all tastes.

Activities and Things to Do

As New Zealand’s most productive fishery, it’s pretty obvious that fishing is one of the best activities you can do at Lake Rotorua. While swimming is not that popular due to the fact that water quality is not ideal, boating is pretty popular along with many other watersports. There are plenty of cruises to choose from as well, and many of them can be found at Rotorua Lakefront. You could also try the Rotorua Walkway, or at least some of its more popular sections. 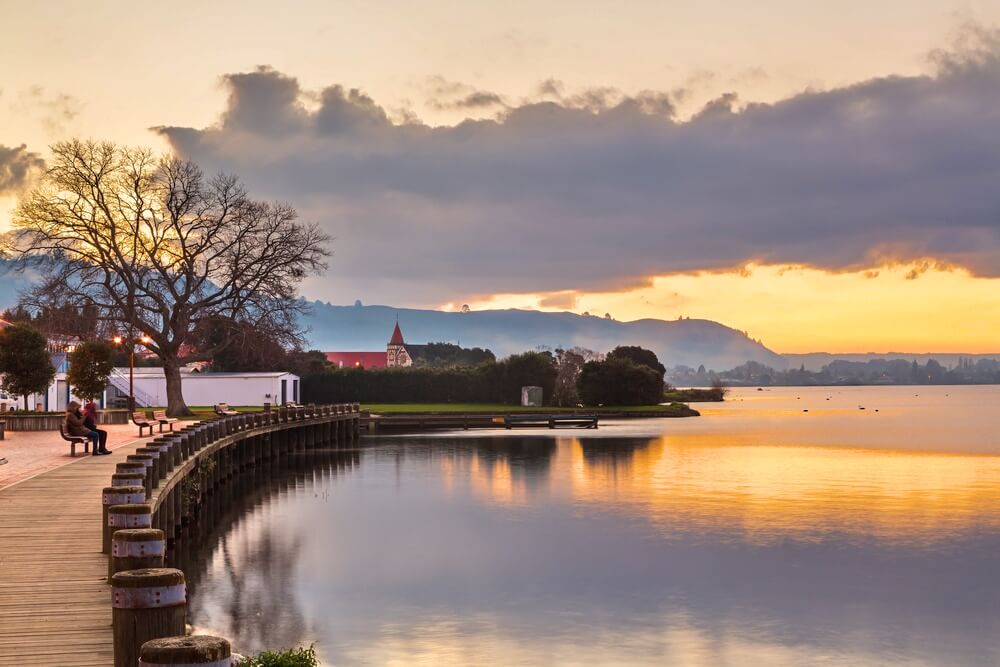 The Rotorua Lakefront boardwalk is a good place to admire the stunning scenery.

Lake Rotorua has a maximum depth of 45 metres that is actually a crater north of Sulphur Point, but is relatively flat-bottomed with a mean depth of 10 metres. The lake has a catchment area of 506 square kilometres. It is teardrop-shaped, measuring around 12 kilometres from north to south and 10 kilometres from west to east. In terms of volume, it is considerably smaller than Lake Tarawera, which is located nearby.

Lake Rotorua is geologically separate from the other nearby lakes, and was formed from the crater of a large volcano located in the Taupo Volcanic Zone, which had its last major eruption around 240,000 years ago. The aftermath of that eruption was that the magma chamber under the volcano collapsed, leaving behind a circular caldera about 16 kilometres wide called the Rotorua Caldera, where the lake is located.

A number of rivers and streams feed Lake Rotorua. In total, there are 9 major streams and 18 minor streams that flow into the lake. Some of these streams, such as the Utuhina, Kuirau, Whakarewarewa, and Ohinemutu Streams, have waters warmer than the lake’s, due to the thermal activity going on in the Rotorua area.

Other streams, such as the Hamurana Spring and the Awahou stream which are located on the northern shore, feed the lake with crystal clear water that has a constant temperature of 10 degrees Celsius. Another important tributary which is known for trout fishing is the Ngongotahā stream. Of all the streams, the Hamurana Spring delivers the greatest inflow of water.

The shallow depth of Lake Rotorua makes it vulnerable to discolouration, especially to sediment after windy weather. As a consequence, the lake is very popular for fishing, but less popular for watersports enthusiasts and swimmers.

Lake Rotorua flows into Lake Rotoiti via the Ohau Channel, which is located in the north-eastern section of the lake and is navigable by boat. The area here, which is also called the Mourea delta, has low water levels and is popular among swimmers and novice kayakers. Also near here is the ancestral land of Ngati Pikiao hapu of the Te Arawa tribe.

The waters of Lake Rotorua, through Lake Rotoiti and Kaituna River, flow into the Pacific Ocean near Maketu. The high elevation difference of 900 feet in less than 20 kilometres has created an environment favorable to white water rafting and extreme kayaking.

The geothermal activity below and around Lake Rotorua, notably at Sulphur Flats (Te Arikiroa), which includes hot mud pools and active geysers, has resulted in high contents of sulphur and other volcanic minerals in the lake. You can often see clouds of steam drifting around the lake’s shores, and the water has a magical yellowish-green hue, a reminder of Lake Rotorua’s volcanic origins. Geothermal inputs flow into Lake Rotorua via streams such as the Waiohewa and Puarenga Streams.

The high mineral content of the geothermal springs was the reason for the development of the early spa and "medical" baths here, where well-to-do people could come to rejuvenate and rest, and maybe cure conditions like fatigue, arthritis, or lymph congestion. 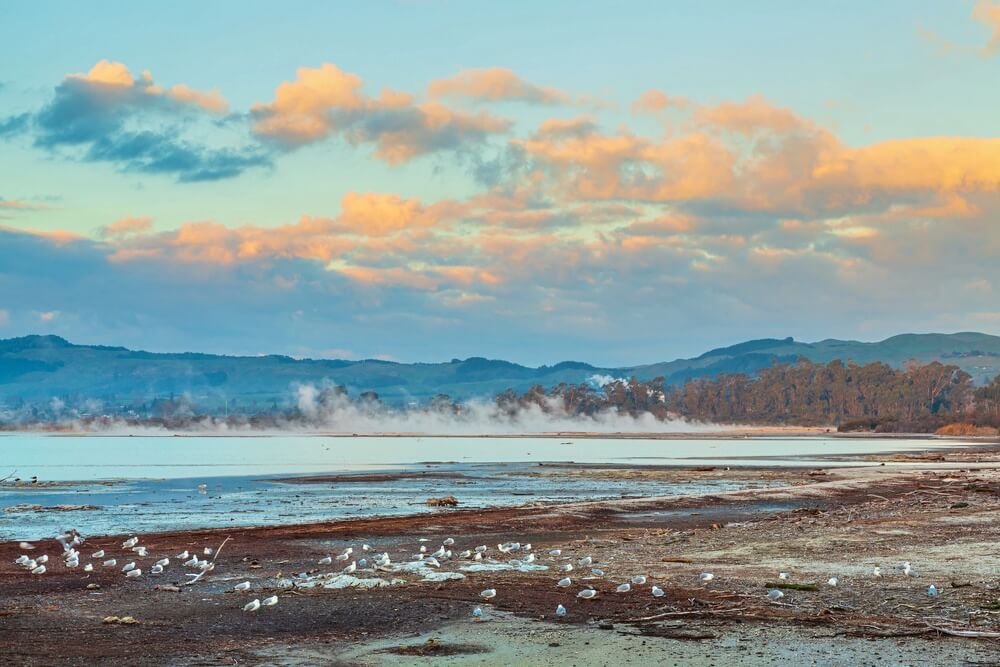 Birds are roosting on Sulphur Flats, while steam is rising from the geothermal hot springs on the shore.

Presence of aquatic plants in Lake Rotorua is pretty low, but stable. Prevalence of invasive species in the lake has gone down, as Egeria has declined starting with the late 1980s and has never recovered.

On Mokoia Island, which is a wildlife sanctuary, you will find many native plants like Pohutukawa, Totara, Karaka, Kawakawa, Puriri, Whau, Cabbage trees, Pohutukawa, Titoki, Pikopiko, Flax, as well as various ferns that were used as everyday ingredients for the Maori people who used to live here. Among the bird species that call Mokoia Island home are the Papango (Teal), Pukeko (swamp hen), Tui, Saddleback (Tieke), Kiwi, Kokako, North Island Robin (Toutouwai), and Weka.

There is a great variety of water birds that can be observed around the lake too, including the red-billed gull, Australian black swans, mallard duck, dabchick, and Caspian tern. 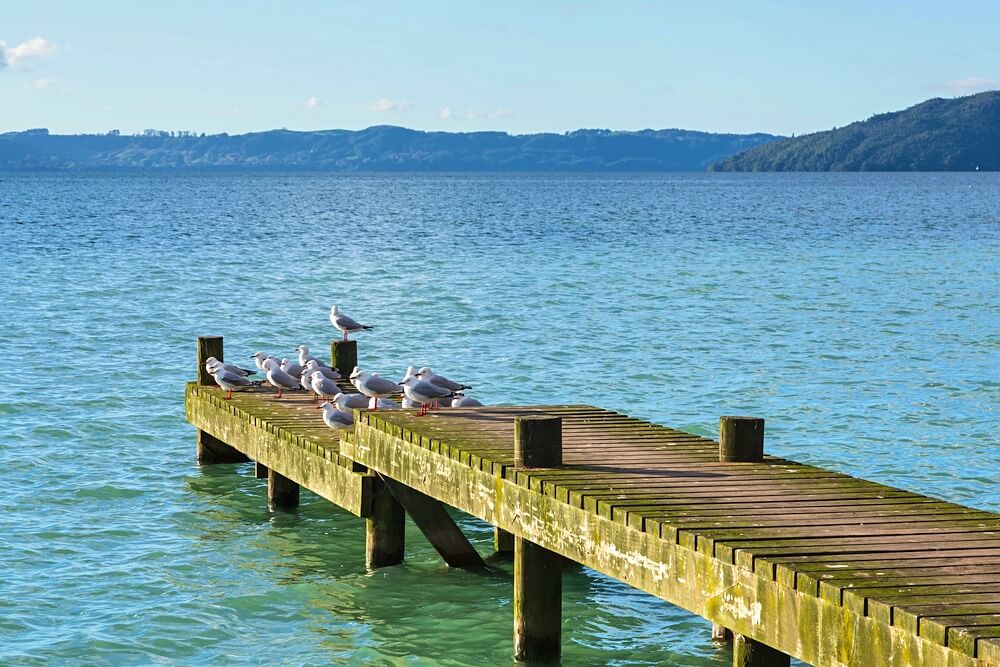 Although gulls are not usually found in geothermal environments, Lake Rotorua is home to several species.

The famous explorer Ihenga sighted the lake first, and named Lake Rotorua Rotorua-nui-a-Kahumatamomoe, which means "the large lake of Kahumatamomoe", in honour of his father-in-law and uncle Kahumatamomoe. As a matter of fact, a number of the lakes in Rotorua were named by Ihenga, which was the grandson of the captain of the Arawa canoe Tamatekapua.

You will find lots of history and Maori traditions around Lake Rotorua. Te Wairoa Buried Village, which was buried by a volcanic explosion in June 1888 costing over 150 lives, is just a short trip away from Rotorua.

❓ Where is Lake Rotorua located?

Lake Rotorua is located in the north central area in the North Island of New Zealand, about 220 kilometres south-east of Auckland by car. Rotorua city is situated on the shores of the lake, which is a part of Rotorua District in the Bay of Plenty region.

❓ How deep is Lake Rotorua?

Lake Rotorua has a maximum depth of 45 metres (148 feet), which can be found in the southern section of the lake, north of Sulphur Point. The average depth is just 10 metres (33 feet) though, making it a relatively shallow lake. For a more detailed view, you can consult the depth chart on the fishing page.

❓ How big is Lake Rotorua?

❓ What is the elevation of Lake Rotorua?