Lake Rotorua is considered one of the best fisheries in New Zealand, and provides amazing fishing opportunities throughout the year. Brown trout and rainbow trout can be caught at the mouths of the lake’s tributaries, where the trout follow the smelt to spawn.

Fish numbers in Lake Rotorua are very high, and the most frequently encountered species of fish are brown trout and rainbow trout, but small amounts of brook trout are also present. The bulk of the population is made up of rainbow trout, that can weigh between 1.5 to 2 kg. There is also a large brown trout population, with the average fish averaging around 3 kg. 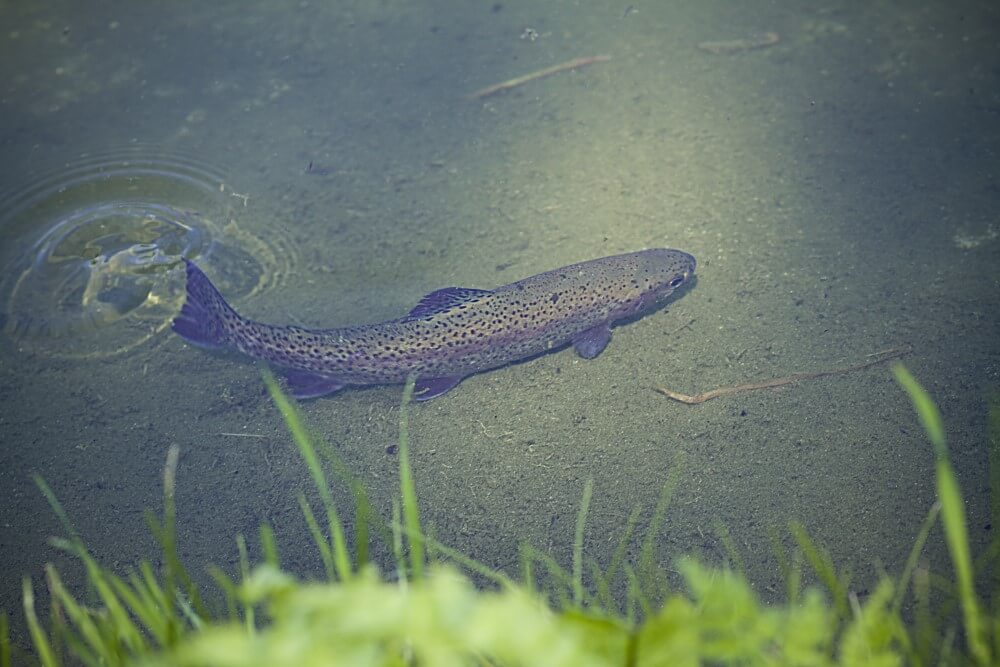 Lake Rotorua has a healthy population of good-sized rainbow trout.

The most productive period for fishing in Lake Rotorua is when the lake’s water temperatures are at their highest. However, bear in mind that the fact that Lake Rotorua is a shallow lake means that water temperatures can rise really fast in the warm summer months, which can lead to algae bloom that reduces visibility in the water. The problem of algae bloom is currently being addressed and seems to be declining.

From December to the end of February, when the summer temperatures are high, the trout are forced to congregate in really large numbers near the mouths of cold water streams. The Ngongotahā stream is particularly famous for trout fishing. The Ohau Channel, which connects Lake Rotorua to Lake Rotoiti at north-eastern corner of the lake, is another spot popular among fly fishermen.

The Waiteti Stream also provides good fishing opportunities, and 8-9 lb trout can be caught at the river mouth. While the Awahou Stream itself is closed to fishing, the delta of the stream can be a very good summer fishing spot, as big numbers of fish come close to shore to take advantage of the stream’s cold water, which is spring-fed.

Starting with March, as the weather begins to cool, the fish disperse throughout the deeper parts of Lake Rotorua, making trolling the most successful method. Starting with April, large numbers of fish run the most important spawning streams of Ngongotahā, Utuhina, and Waiteti.

During winter, trolling can be very productive. As large numbers of trout prepare to move up the lake’s tributaries for their main spawning runs, the fish can be targeted close to the shore.

TIP: Lake Rotorua has many good fishing spots, so visit the surroundings during daylight in order to get familiarized with the lake.

Lake Rotorua is an angler’s paradise, and as an angler you will find excellent fishing conditions throughout the year. Most fish is caught trolling or harling from boats, but there are great shore-based, fly fishing, and spinning conditions as well.

Trolling and harling is allowed on the entire Lake Rotorua, except within 200 metres of major tributary stream mouths. Trolling can be particularly productive, although anglers may want to use leadline in order to get the lure to an appropriate depth.

For those who prefer fly and nymph fishing, the stream mouths can provide very good fishing opportunities throughout the entire year. Lake Rotorua can also be easily and safely waded in many places.

Luring down to between 4 to 6 metres below the water surface is usually necessary when trolling. This can be achieved by using a leadline, a lead core line or deep-water express line, and a leader of 3-5 metres.

The best approach for fly fishing is to use a weight six or seven rod, as well as a floating or slow sinking line.

Blowflies, wasps, and cicadas are blown into the water during mid and late summer, attracting cruising trout. Dry flies with patterns that represent these insects can be successful. When using a floating line, lightweight nymphs like Hare, Copper, Halbacks, and Pheasants Tail can be really useful around the stream mouths.

Wet flies or streamers can be used in spring and summer, when the trout are chasing smelt. During the day, you can use flies like Grey Ghost, Parsons Glory, or a light Rabbit, while during the night, you can use Scotch Poacher and Fuzzy Wuzzy.

As for spinners, you may want to experiment throughout the day with different colours. In general, spinners like Rapala, Tasmanian Devil, Cobra, or Black Toby work well.

Accessing the shoreline is straightforward, as a road runs around the lake, and the Rotorua city is located on the southern edge of the lake. If you want to fish by boat, there are public boat launch areas all around the lake. There is also easy access to most stream mouths, which provide excellent fishing opportunities for shore based anglers.