Get close to some rare bird species.

Cruise around the island.

Learn about Māori culture and history.

Plant a tree on your visit here.

There’s a composting toilet on the island.

Mokoia Island, a rhyolitic lava dome which rises 179 metres above the lake’s water level and was formed by slowly oozing lava, is considered by many the most well-known lake island in New Zealand. It is located in the centre of Lake Rotorua, 2 km from the eastern shore. With a surface area of 1.35 square kilometres, the uninhabited island has been a sanctuary for wildlife and endangered birds since 1921.

Mokoia Island is also known by an old Polynesian name, "Te Motutapu-a-Tinirau", the sacred island of Tinirau, "the ancestor of all fish". It is owned by four local Maori iwi, or tribes, who run it with the help of the New Zealand Department of Conservation.

You can explore beautiful Mokoia Island on any of the easy tracks available.

Mokoia Island’s notoriety can at least partially be attributed to one of the most beloved and well-known Māori legends, the legend of Hinemoa and Tutanekai, one of New Zealand's greatest love stories.

The story goes that at one time, a high ranking and beautiful young maiden named Hinemoa lived in Owhata, on Lake Rotorua’s eastern shores, and she was the daughter of a very influential chief. Hinemoa was declared puhi (meaning sacred) because of her rank, so her family and the elders in her hapu (meaning tribe) would have to choose her husband when she reached maturity. Hinemoa’s grace and beauty were known far and wide, so many people came to seek her hand, but none of the suitors gained the tribe’s approval.

Tutanekai was the youngest in a family of several brothers who lived on Mokoia Island. He was born out of an affair of his mother with Tuwharetoa, who was from another tribe, but his mother’s husband raised Tutanekai as his own son. Every one of his elder brothers had seeked to win Hinemoa’s hand, but none won the approval of Hinemoa’s people. There were many young chiefs who saw Hinemoa during meetings where matters of the state regarding the tribe were discussed, and fell in love with her because of her beauty.

The same thing happened to Tutanekai, but he was well aware that he would never win the approval of Hinemoa’s people because of his lowly birth. However, Tutanekai was very handsome and extremely skilled at the games that Maori used in preparation for battle, and which were played at gatherings.

Eventually, Tutanekai’s qualities caught Hinemoa's attention, and she fell in love with him. With each tribal meeting, their love for each other deepened, but they were only able to convey their feelings through glances of longing, without ever being able to speak with one another. Because of this, Tutanekai would sit on Mokoia Island’s shores, and would play sad music on his flute. On still evenings, the music would waft across the lake to where Hinemoa also sat, filled with sadness and passion. In order to prevent Hinemoa from sneaking away, her people would pull the canoes on the shore, so they would be too heavy for her to move.

But after listening night after night to her would-be lover, Hinemoa couldn’t take it anymore, and decided she would swim to Mokoia Island. After she collected six calabashes from the cooking house, the next night she headed to the lakefront and went into the water at a beach called Wairerewai, and started swimming towards Mokoia Island. Because it was dark outside, she had to rely upon the sound of flute to guide her to Mokoia Island. When she finally made it to the island, she had become so cold that she went straight to the Waikimihia hot pool, which was right near Tutanekai's house.

After she warmed herself, Hinemoa had to think about how to let Tutanekai know of her arrival. As chance would have it, Tutanekai sent his slave to fetch a calabash of water, as he was thirsty. As he passed the pool where Hinemoa was sitting, a voice asked him for whom the water was, and the slave answered that it was for Tutanekai. Hinemoa asked for the calabash, and she smashed it on the side of the pool. When Tutanekai found out about this, he sent the slave again, but Hinemoa smashed the calabash for the second time.

Tutanekai became angry, so he took his mere (greenstone weapon), went to the pool himself, and challenged the person in the pool to reveal themselves. Although Hinemoa had hidden under a hanging rock and was standing still, Tutanekai found her and pulled her clear. He couldn’t believe it was Hinemoa, and when she came out of the water, he thought he had never seen such a beautiful woman. He wrapped his cloak about Hinemoa and they both went to his house to sleep.

The next morning, after seeing that his son was sleeping late and because Tutanekai always rose first, his father sent for him. The slave that his father sent came back and said that Hinemona was in Tutanekai’s house. The brothers would not believe this, but Tutanekai stepped out of his house together with Hinemoa. The people from the village noticed canoes coming towards the island, and feared war was coming because they knew it was Hinemoa's family. However, once Hinemoa’s family arrived on Mokoia Island, both tribes rejoiced and lasting peace between them was forged.

As a wildlife sanctuary, Mokoia Island is home to a great variety of native plants, such as Totara, Pohutukawa, Puriri, Karaka, Pohutukawa, Kawakawa, Pikopiko, Cabbage trees, Flax, Titoki, or Whau. Various types of ferns that were used as everyday ingredients by the Maori who used to live here, can also be found.

The island is a bird watcher’s delight. Some of the bird species that can be encountered on the island include the Tui, Kiwi, Weka, Kokako, Pukeko (swamp hen), Papango (Teal), North Island Robin (Toutouwai), and Saddleback (Tieke). Many of the bird species are rare, and the North Island saddleback is even endangered. In order to protect these species, Mokoia Island is free of predators. 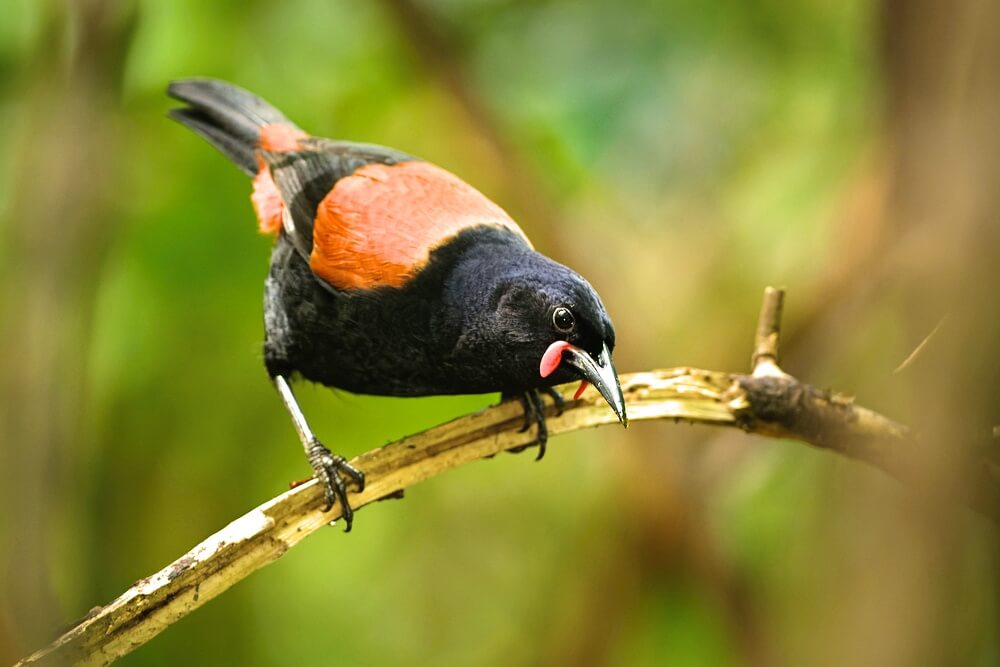 The North Island saddleback, known in Māori as the tīeke, is a very beautiful forest-dwelling bird that can be found on Mokoia Island.

Activities and Things to Do

With its volcanic history, cultural and conservation background, it's not hard to put Mokoia Island at the top of the list of things to see in Rotorua. This place is amazing for geographers, bird enthusiasts, conservationists, but also for families.

Geothermal hot pools are present on the island, and while Hinemoa's Pool is the most famous one, there are other pools on the island as well. Geothermal spring water rises through the lake bed, a great chance for a great swim or for having a foot soak.

If you want to do bird watching, you’re in luck, as this is an amazing place for this activity. You can start from the cleared strip of land and into the lush, canopied bush, and go on the narrow trail. You will have the chance to hear one of the most beautiful bird choirs you have ever heard in your life, with many birds singing different types of songs.

There are some easy walking tracks on the island, which will allow you to explore it while the guides provide information about the local flora, fauna, and history.

Nowadays, you can explore the history and the natural beauty that Mokoia Island has to offer with the help of a guided tour or a cruise. Visitors to the island can also enjoy a bath in Waikimihia (also known as Hinemoa's Pool), which is located on the south-eastern side of the island.

Access on the island is restricted to specific operators only, which go through inspections in order to make sure that their vessels are free of pests. You can check out cruise departure times or make reservations at the museum on the mainland.