Geyser Flat is home to most of the active geysers at Whakarewarewa. The geyser system is very complex, as they are aligned on a common fissure, and each geyer’s activity affects another one. Every geyser in Whakarewarewa has a name, which is derived from its characteristics or is a reminder of names of local heroes.

The amazing display of the power of nature offered by the geysers was under threat until the 1980’s, as the area’s geothermal resources were tapped into for commercial and domestic heating. Fortunately, the local government closed the drains in the 1980’s, and the geysers in the area are back to their original beauty.

Pohutu Geyser, Prince of Wales Feathers Geyser, Waikorohihi Geyser, and Te Horu Geyser (or The Cauldron) are located about 6 metres (20 feet) above Puarenga Stream, on a sinter plateau. Their eruptions are also connected: Waikorohihi Geyser begins with a discontinuous jet 5 metres high, followed by Prince of Wales Feathers Geyser and finally Pohutu Geyser.

The most famous geyser in the region is Pōhutu Geyser, the largest geyser in New Zealand and in the entire Southern Hemisphere. The name of the mighty Pōhutu Geyser actually means "explosion" or "big splash", a name truly earned, as the geyser erupts approximately once per hour to heights of 30 metres (98 feet).

If you want to see this majestic geyser in all its glory you need to enter Te Puia, the geothermal park that also features mud pools, traditional Māori carvers and weavers, bush walks, and more. 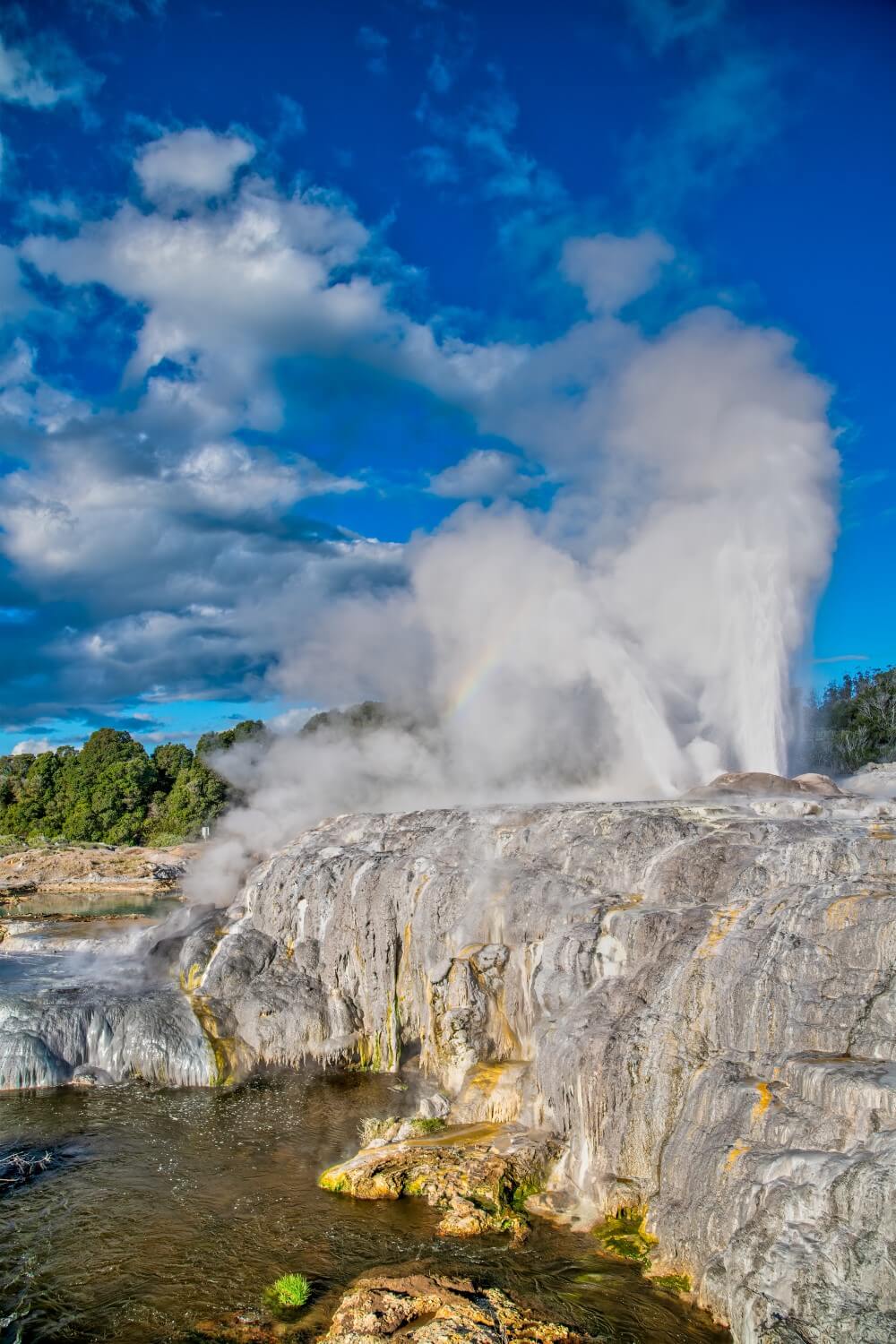 The spectacular Pōhutu Geyser erupts once per hour to heights of 30 metres.

Keruru Geyser, which is independent of other springs, is located at the head of an apron of blackish sinter, 2 metres above Puarenga Stream. The fan-shaped geyser erupts once every few days to heights of 15 metres (49 feet). It didn’t have any major eruptions between 1972 and 1988, and its recovery was linked to the reduction of well drawoff in 1987.

Prince of Wales Feathers Geyser is the closest neighbor of Pohutu Geyser and always precedes it, initially as a feeble jet that gradually increases in power. Eventually it ejects a continuous 9-metre column at an angle, which is when usually Pohutu erupts as well.

There is a direct connection between Te Horu and Pohutu, as much of the water that erupts from Pohutu and is cooled by air falls into Te Horu's vent. This is a possible explanation for the belief that Pohutu is more active when the wind blows from the south, as its water is then blown to the north. Alternatively, when the wind blows from the north, it returns much of the air-cooled water to the system, delaying the next eruption.

Also called the Boxing Glove, Mahanga Geyser is an old geyser that was first seen erupting in 1961. It can erupt to heights of 3 - 5 metres, and its activity is independent from that of its neighbouring Waikorohihi Geyser.

Wairoa Geyser used to be the largest one at Whakarewarewa, erupting to the amazing heights of 60 metres. It did not erupt regularly, so its spurts were sometimes induced with the help of soap, to impress visitors. The 60-metre column used to last around a minute, and was followed by smaller shots. Wairoa Geyser’s longest eruption took place on January 8th 1903, and lasted 130 minutes. 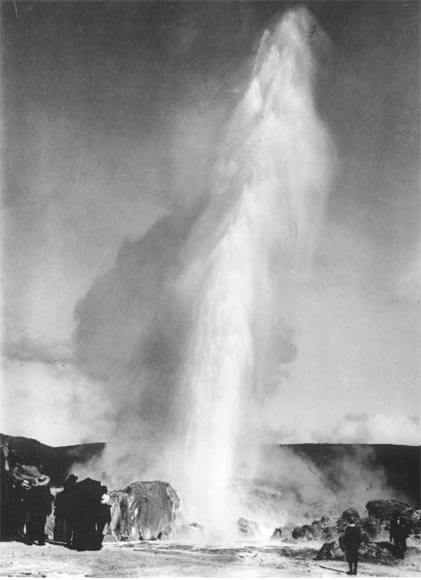 Wairoa geyser in 1906. This geyser used to erupt to heights of up to 60 metres. Photo credit: Te Ara-The Encyclopedia of New Z.

Waikite Geyser last erupted in March 1967, leaving the vent mostly dry since then. Forming the apex of a sinter mound located 260 metres south of Pohutu beyond Geyser Flat, Waikite Geyser used to erupt after long periods of rain, which suggests that the water level in its vent is dependent on the amount of rainfall.

In 1996, it dry vent which is 8.5 metres (28 feet) deep filled with boiling water which reached a level of 2.3 metres below overflow. Many people hope that Waikite will one day erupt again.

Another important dormant geyser at Whakarewarewa is Papakura Geyser, which last erupted in September 2015, shooting water as high as 4 metres into the air for around 36 hours. Before 2015, it had been dormant since 1979, until it started showing signs of life in 2013 with bubbling water, steam, and overflow. The 2015 eruption was attributed to the bore closure programme in the 1980s.