The Rotorua walkway is a 26-kilometre long walkway that has been developed in 10 years. Containing 8 shorter sections of various lengths, the walkway is a great way for visitors to enjoy some of the most scenic points of interest in Rotorua. Some of the main features of the walkway include native wildlife, geothermal areas, and historic sites, and you can enter or exit it at any stage. 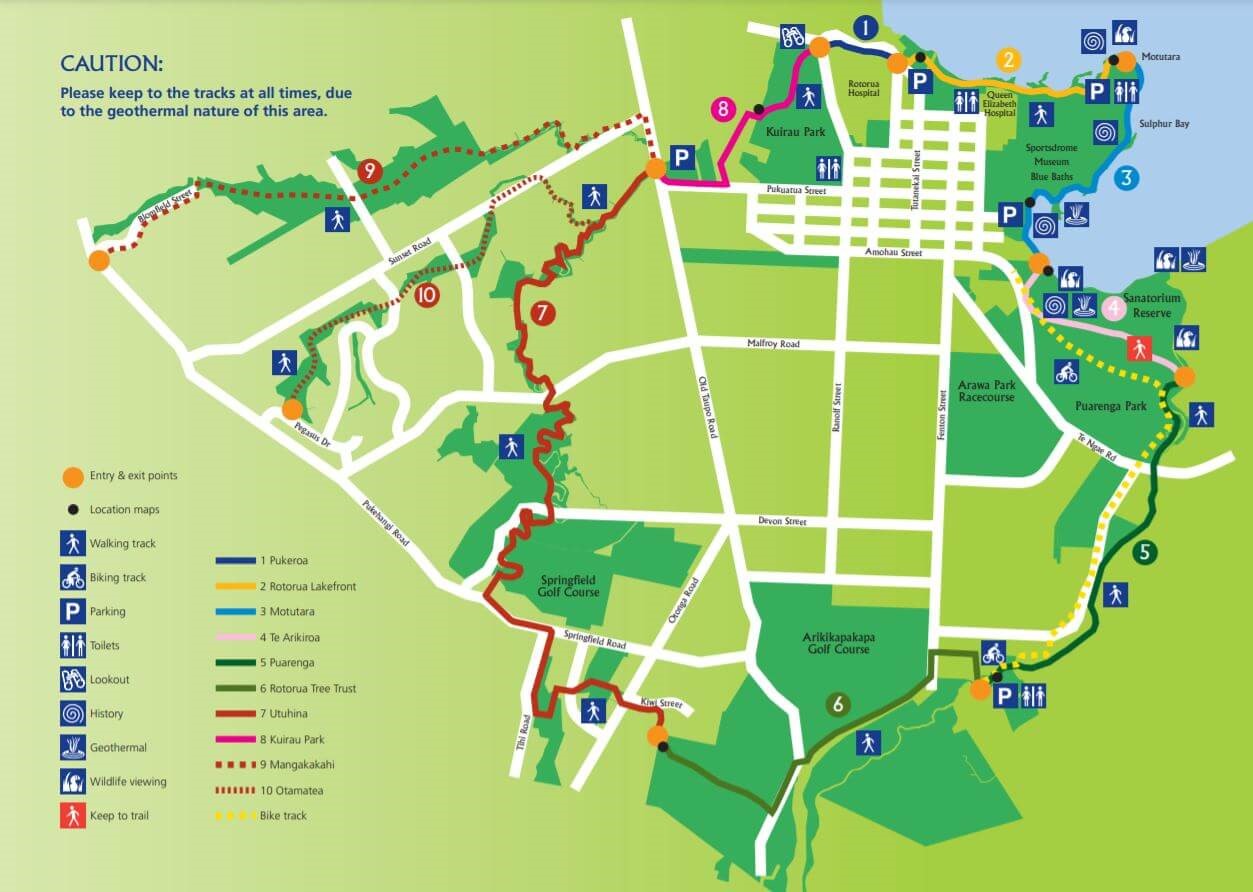 The Rotorua Walkway is made up of 8 sections, with a total length of 26 kilometres. Photo credit: rotorualakescouncil.nz.

Pukeroa, or as it is commonly known, Hospital Hill, was occupied and used by Ngati Whakaue as a fortified village and garden for generations. In 1881, Ngati Whakaue gifted it to be used as a reserve for recreation and sports, so it was the venue for all major outdoor events for many years.

In 1916, a military hospital that took care of returning soldiers was built on the reserve, which later became King George V Hospital and still occupies the site. Urupa (burial) sites are also present on Pukeroa Hill, but the human remains have long been removed. Still, these sites are still significant to local iwi.

The north-western slopes of the hill were named Pukeroa, and this is where the walkway now passes through.

Many years ago, a woman who lived on the hill gave birth to a daughter who had flaming red hair, and was named Te Makawe. When she died, Te Makawe served as a medium to her mother, and allowed her to speak to the spirits. The tapu rock that is associated with Te Makawe was named after her, and shows how significant she was to Ngati Whakaue. The rock can be found just off the walkway.

You can also find a very special oak on the eastern flanks of the walkway, the Malfroy Oak, which was planted on August 4th 1893 by Jean Michel Camille Malfroy, who was an important Rotorua engineer and civic administrator in the 1880’s. A few months after he planted the tree, Mr Malfroy died, and an iron fence with a plaque attached was erected around it.

The second section of the walkway goes through the Rotorua Lakefront Reserve, and is a great spot from where you can see Mokoia Island, which is famous for one of New Zealand’s most popular love stories, that of Hinemoa and Tutanekai. You can find more information on this local legend on panels around the walkway. If you want to visit Mokoia Island, you can do so by taking one of the boats that leave daily from the Lakefront.

Also known as Sulphur Bay, this is Lake Rotorua’s most southernmost bay, and one of the most important wildlife habitats in New Zealand. It became a wildlife refuge in 1967, a status which covers the water area of the entire bay.

A warm, sulphurous area lying on top of an active geothermal field, Sulphur Bay is home to many of the waterbirds that inhabit Lake Rotorua. Even though the murky, acidic water is very low in oxygen, and contains very little that can be used as food by the birds which need to leave the bay each day to feed, the bay is still an outstanding habitat for waterbirds. As a consequence, many different bird species live here.

Two islets can be seen from the walkway off the eastern shore of the Motutara peninsula, which are called Timanga and Moturere. Timanga was once much larger, and it used to be home to a number of families. Nowadays, roosting and nesting birds occupy it most of the time. In the past, Moturere Island was host to a popular bath that was used to treat many illnesses. Sharpening stones were used here for the polishing of greenstone and sharpening of adzes, as the warm waters and soft rock made this island ideal for sharpening tools. Nowadays, only a small part of the original island remains above water, as Moturere was almost covered when the lake level rose.

If you continue south, you will arrive at Sulphur Point, which contains many active geothermal features such as sulphur vents and mud pools. You are advised to stay on the path at all times here, as the area is very dangerous.

Rocky Point is a low and rocky finger of land formed by ancient hot springs cementing lake bed sand and gravel. Rocky Point is a favorite nesting spot for gulls like the black backed, black billed and red billed. Unauthorised access is not permitted in Rocky Point, as it is a wildlife refuge.

Section 4 of the walkway is called Te Arikiroa, which is the name of the area located on the southern shores of Sulphur Bay. Centuries ago a battle was fought here on the sandy beach, and in order to remember that battle between the tribes Ngati Tangaroa-mihi and Ngati Tama, the site was given the name Waiwhitiinanga.

The first aeroplane to visit Rotorua, piloted by Capt Lesley Brake, also landed here in April 1922. It was actually the result of a forced landing caused by an engine failure. After repairs were made, the plane successfully took off from the beach during the following morning.

Although this area is barren and inhospitable, it provides roosting habitat for birds like the banded dotterel, which nest and raise their young here.

Section 5 of the walkway drifts away from Lake Rotorua along Puarenga Stream, which was named after the patterns of sulphur particles that float on its surface. Both hot and cold springs feed the stream, which goes from above Whakarewarewa to Sulphur Bay, where it flows into Lake Rotorua.

The people of Whakarewarewa used Puarenga Stream as an important travel route to and from the lake. It was also the site of several important battles. The Rotorua basin was covered by a kahikatea forest 7,000 years ago, and remains of it can be seen along the banks of the stream due to the geothermal action that has silicified the ancient timber of the forest.

The walkway passes under the Te Ngae Road bridge for safety reasons. The Puarenga section of the walkway finishes at the gateway to the Whakarewarewa village.

Rotorua Tree Trust is also home to the Soka Gakkai International Peace Monument, which was unveiled here on September 8th 2000. The monument has a circular design and features 3 granite walls, together with the messages of 6 prominent people inscribed in Maori, English, and Japanese.

Section 7 is the longest of the walkway and takes on average almost 3 hours to complete. After passing through urban streets at first away from the Rotorua Tree Trust, most of the section follows the Utuhina Stream through residential suburbs. It provides great access to a beautiful stretch of trout fishing stream. Two separate branches of the walkway go up the Otamatea and Mangakakahi tributaries, and are named after them.

The walkway passes under the Old Taupo Road bridge, crosses the Medical Officers reserve, and then reaches the Kuirau Park section.

The final section of the walkway is located in Kuirau Park, which covers a surface area of 30 hectares and is located at the junction between Ranolf Street and Lake Road. While the northern section of the reserve was endowed by Ngati Whakaue in the late 19th century, the southern part was developed during the Depression in the 1930’s. Previously, the area had been a swamp covered with a heavy growth of manuka almost entirely.

The northern part of the reserve still contains many geothermal features, which can be observed right from the walkway. As is the case with all geothermal areas, you should stay on the walkway for safety reasons.