On the southernmost edge of Lake Rotorua you will find Sulphur Bay, where the water gets milky white, a result of the sulphur particles suspended in the water. The bay stretches from Motutara Point to Ngapuna, and the Puarenga stream, which flows through Whakarewarewa geothermal area, flows into Lake Rotorua at Sulphur Bay. The bay is also home to a Wildlife Refuge and a Wildlife Sanctuary. If you are interested in the history of the area, you can find lots of interesting pieces of information on the panels in the area.

The bay is a perfect example of the region’s geothermal environment. This is where around 28,000 tons of water get poured into the bay daily, from the geothermal field. You can have a great look at this spectacle from the viewing platform at the Rotorua Museum. The landscape around Sulphur Bay is constantly changing, and includes features like rocky terraces, silica flats, sulphur ledges, steam vents, and active boiling mud pools. The area near the outlet of the Puarenga Stream is called Sulphur Flats, an area which is still largely in its natural state. 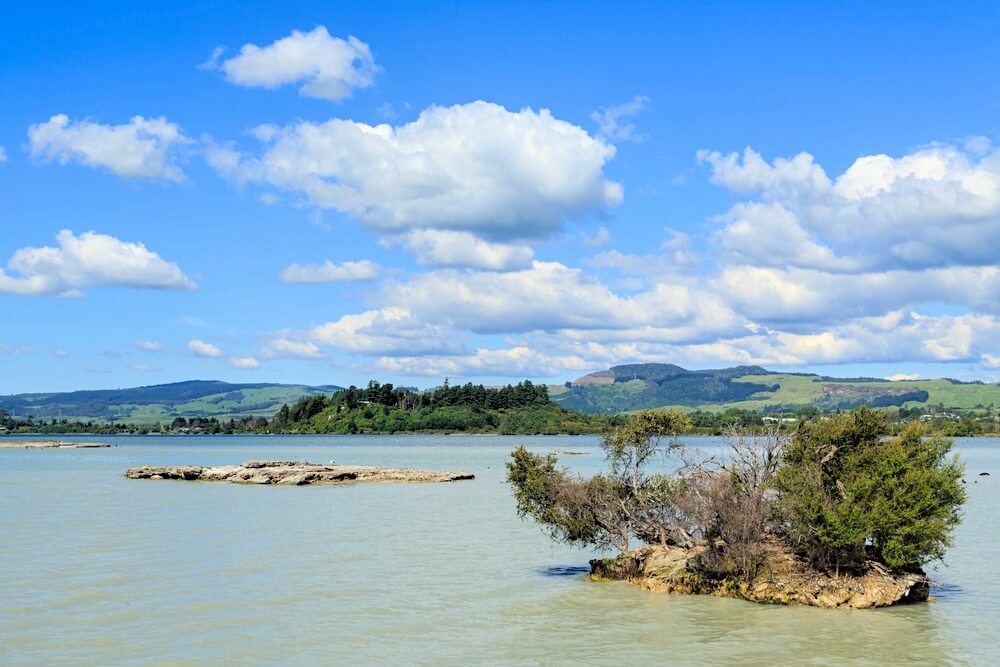 The geothermal hot springs at Sulphur Bay colour the waters milky white with minerals. The small islands are part of a bird sanctuary.

The bay is also a wildlife refuge that covers an area of 145 ha, hosting many native birds that are attracted by the warmth generated by the geothermal activity and its closeness to feeding grounds. Bird watching enthusiasts will be delighted here, as 60 different species of birds can be spotted here, including the scaup, the banded dotterel, three types of gull including the black-billed gull, and the nationally threatened New Zealand dabchick.

The insects and larvae can tolerate the acidic conditions in the bay, and as a result few birds feed here. Rather, they seek food in other parts of the lake. However, the geothermal warmth in Sulphur Bay helps them conserve energy that would otherwise be used to keep their bodies warm.

The gulls that can be found here are unique, as gulls are not usually present in geothermal environments. Only 5% of the population of black-billed gulls is found on New Zealand’s North Island, which is one of the world’s most threatened gull species. Black-billed gulls can only be found in New Zealand, and are classified as Nationally Critical. Their population has been decreasing at Lake Rotorua, due to predation by feral cats, rats, and mustelids, and due to the decrease in water quality.

Another gull species found here is the red-billed gull, which is the most common on New Zealand’s coast. However, the colony at Sulphur Bay is unique, as this species of gull can rarely be found inland.

The bay is a very harsh environment for plant life, because the high levels of iron and sulphur in geothermal soils make them infertile. Plants are also exposed to toxic gases and steam here. Despite the harsh conditions, specialised vegetation with needle-like leaves, irregular flowering habits, and slow growth rates, such as turutu (blueberry) and raupo (bulrush), grow here.

How to Get to Sulphur Bay

The bay can be accessed from the Rotorua CBD. You can find free parking at the Lakefront, or at the Government Gardens. If you are on the Lakefront, just follow the road past the waka that’s on display.

The beautiful Sulphur Point can make you feel like you are walking on another planet.

Located at the southern end of Lake Rotorua, Sulphur Point is a unique, beautiful and fascinating area, barren and wild, that will make you feel like you are on another planet. It contains a lot of geothermal features, such as sulphur vents and mud pools.

If you want to access Sulphur Point, you can do so by turning left behind Rotorua Energy Events Centre behind the Rotorua Museum. Sulphur Point also offers access to the Rotorua Walkway, you are advised to stay on the path at all times, as the area is very dangerous.

Sulphur Point is visible from the Lakefront. You will find a boat ramp and toilet facilities here. By the boat ramp, you might notice a very small island named Motutara Island. You might also notice wonderful wildlife here, as the island is a wildlife sanctuary, and in the right season it is covered in many types of baby birds, such as Robin, Saddlebacks, Weka, and Shag. Some of the bird species that call Sulphur Point their home are protected by the Department of Conservation.