If you’re looking for a piece of heaven on earth, Torch Lake is the destination for you. It’s located in northwest Michigan, just off Lake Michigan, and it’s famous for its crystal clear turquoise waters, white sand, and lively summer parties. Torch Lake allows you to enjoy a piece of the Caribbean without leaving the country and it offers a magical spectacle where the waters change from green to fiery gold, to deep turquoise. It also offers memorable sunsets and incredible views all around.

If you've been to Torch Lake , please write your impressions about it by using the form below. 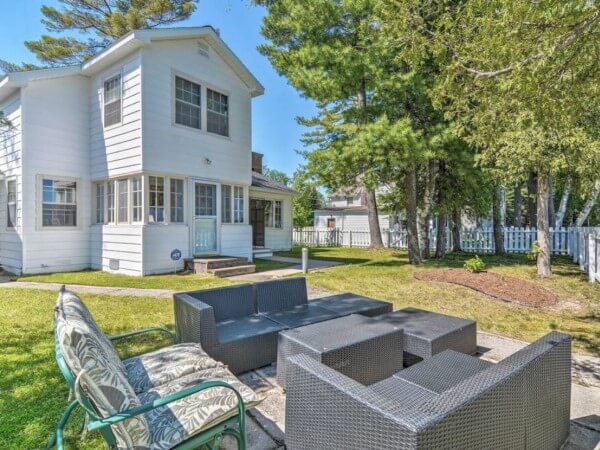 This cottage is a charming blend of hip and comfortable, right on the shore of Torch Lake. It features 4 bedrooms, 2 bedrooms, an outdoor shower, a deck, and a shaded backyard. It also offers access to a private beach and a lakefront fire pit. 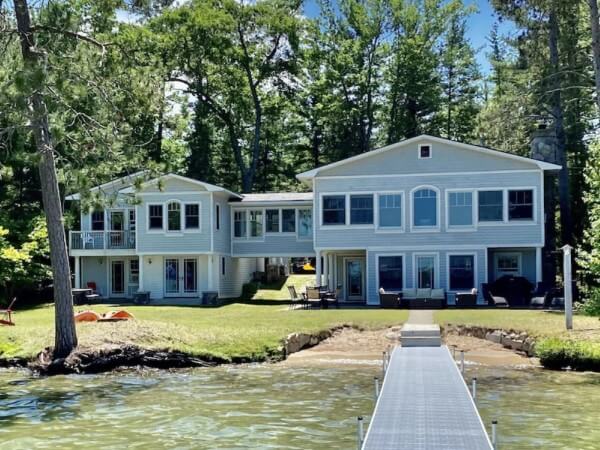 This vacation rental is ideally located on the southern shore of Torch Lake, which has crystal clear waters, a sandy bottom, and turquoise as the water gets deeper. 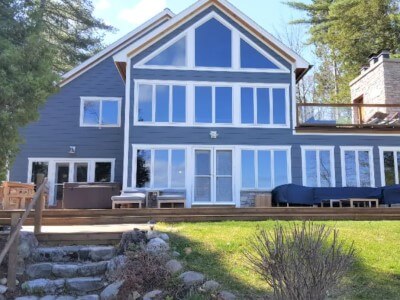 Blue Tranquility on the South End Of Torch Lake

This 4-bedroom, 3-bathroom home offers room for the entire family, or for several families. It features a sandy beach and an outdoor deck with a hot tub, from where you can enjoy some amazing views.

Torch Lake is one of the gems of Michigan’s Chain of Lakes, and it offers the perfect summer weather, so it makes for a great getaway. Torch Lake is a bit secluded though it is surrounded by million-dollar homes, so it’s not too touristy.

For many years, the lake was not very well known, but that changed with the emergence of social media. Now, this destination is a popular spot and many people add it to their bucket list. People enjoy Torch Lake during the summer and many come out in their boats to enjoy their time here. Fourth of July sandbar celebrations are particularly popular, so that’s something to look forward to.

Whether you decide to join the party in the sandbar, chill on the shore, dive in the water, or cruise the lake, you will have a great time at Torch Lake. However, what many first-time visitors don’t know is that visiting the lake comes with a few challenges, such as accessing the water, finding the beach, and securing rentals.

Today, you will learn everything you need to know about Torch Lake so you can prepare and have the best possible time in this gorgeous spot!

The Chain of Lakes begins with Six Mile Lake, which is located in northern Antrim County. This lake is connected with Lake Bellaire, from which the Grass River flows into Clam Lake, which drains into Torch Lake through the Clam River. Torch River flows into Lake Skegemog and it opens into Elk Lake, and this is the river that drains Torch Lake. Elk Lake then flows into the Grand Traverse Bay on its east side and 60% of the surface water in this bay comes from the Chain of Lakes.

One interesting thing about Torch Lake is that it remains cold during the summer, but that’s because it’s so deep. Shallow areas that are close to the shore will be warmer, of course, so that’s something to note. Even though the waters are cold all year round, Torch Lake doesn’t freeze during winter, which means you can visit at any time of the year.

The named tributaries that relate to Torch Lake are the Clam River, Wilkinson, Eastport Creeks, and Spencer. There are other smaller tributaries but they remain unnamed. 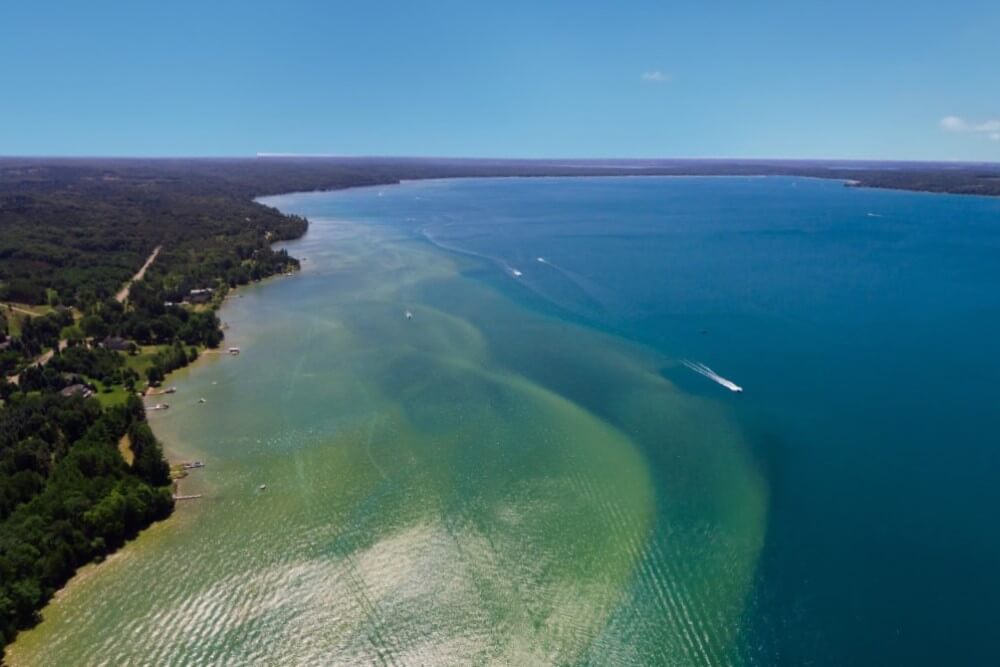 Torch Lake used to be part of Lake Michigan until it was separated by a sandbar formation that runs across the northwest mouth of the lake. One of the most interesting things about the lake is its Caribbean-like waters, so many people wonder why they look so clear and have such a lovely turquoise color.

Well, Torch Lake has crystal clear turquoise water because of its geology. The lake is a bay that’s similar to a fjord that was carved by glaciers during the last ice age, also known as glaciation. This glaciation process caused the glaciers to retreat and in doing so, they carved lakes and glacial till. When exposed to great pressures, ice and behave as a viscous liquid.

Over time, glaciers accumulate gravel, rocks, and even boulders. As it flows, the glacier moves and it has a sandpaper effect where lakes are carved out and underlying rocks are pulverized into fine glacial till. The sediments found at the bottom of Torch Lake are mostly limestone, which was pulverized by the glaciers when the once existed where the lake is now located.

The combination of this fine calcium carbonate white sediment at the bottom of the lake and a low organic content means there’s nothing to darken or discolor the water, which is why it’s so clear. This is precisely why Caribbean waters are also clear and turquoise because the sediments are mostly limestone and there’s not much organic content in the water.

When you visit Torch Lake, you will notice that there are large sand areas in certain locations, particularly the north and the south ends of the lake. There are wide, sandy, and shallow regions that parallel the shore almost everywhere in Torch Lake, and this ends in a steep drop-off.

There are few aquatic plants in Torch Lake, but the most abundant one is muskgrass. Other than that, you can find wild celery, also known as tapegrass, pondweeds, and water milfoil in a few locations of the lake. In recent years, the presence of golden brown benthic algae has increased.

Because the water in the lake is so clear, it provides a nice view, which is something swimming birds take advantage of because they are visual predators. That’s why it’s so common to see them hunting in the water. Torch Lake is a great spot for them and they are very slick, so it’s fun to see them do their thing. Torch Lake is also home to a few aquatic invasive species, such as the Round Goby, Eurasian Watermilfoil, and zebra mussels.

Torch Lake doesn’t have that name because of its shape. It actually derives from the Ojibwa name "Was-wa-gon-ong", which translates to "place of the torches", and it refers to the Native American practice of using torches at night to attract fish, which they would then harvest using nets and spears. European settlers referred to the lake as "Torch Light Lake" for a while, but it eventually turned into Torch Lake because it was shorter and more comfortable to say.

Torch Lake is super easy to access, which is great. As mentioned earlier, there are 48 different access points along its 41-mile shoreline, so it’s easy to find your way. Just keep in mind that most of the access points are located at the end of a street, so you won’t have access to the beach if you go that way.

To enjoy your visit, make sure you check your gas gauge often and bring enough snacks and drinks because there aren’t many restaurants and stores on Torch Lake. There’s also no bridge over the lake, so you’ll have to use your car or a boat to get from one side to the other.

The weather at Torch Lake is perfect for boating because it stays quite warm in July, August, and even early September. On average, the weather reaches 80 degrees, but it can also get to 70 or 90 degrees on some days. Humidity is also high during the summer, so keep that in mind. The good news is the water remains cold and it provides relief from the heat and humidity.

❓ Where is Torch Lake located?

Torch Lake is located northwest of Michigan’s lower peninsula, in the township of Antrim County. It’s also surrounded by other townships. This gem is only a 2 to 5-hour drive from the Grand Rapids area and only 45 minutes from Traverse City.

❓ How deep is Torch Lake?

Torch Lake has a maximum depth of 285 feet (87 m), reaching it just off the east end of Campbell Road in Milton Township. The lake's average depth is 111 feet (34 m), which makes it the deepest inland lake in Michigan.

❓ What city is Torch Lake in?

Due to its rather large surface area, the lake is not located in any one particular city. Rather, it is surrounded by several townships such as Torch Lake Township, Forest Home Township, Milton Township, Helena Township, Central Lake Township, and Clearwater Township. There are also several villages located on the shores of the lake, such as Alden, Clam River, Eastport, and Torch Lake.

❓ Why is Torch Lake so clear?

The limestone sediments at the bottom of the lake were pulverized by glaciers that used to take its place. This white sediment, in combination with very low organic content, gives water its beautiful color and clarity.

❓ How big is Torch Lake?

❓ How far is Torch Lake from Traverse City?

The lake is located 17 miles (27 kilometers) northwest of Traverse City.

❓ How long is Torch Lake?

The total length of the lake is 19 miles (31 km), making it the longest inland lake in Michigan.

❓ What make the 4th of July celebrations special at Torch Lake?

The 4th of July celebrations at Torch Lake are truly unique and they offer the complete experience, fireworks included. They are shot from the south at dusk and provide a great show. Torch Lake also draws a ton of pontoon boats because people go there to have fun, and sandbar 4th of July parties are incredible.

Have You Been to Torch Lake ?